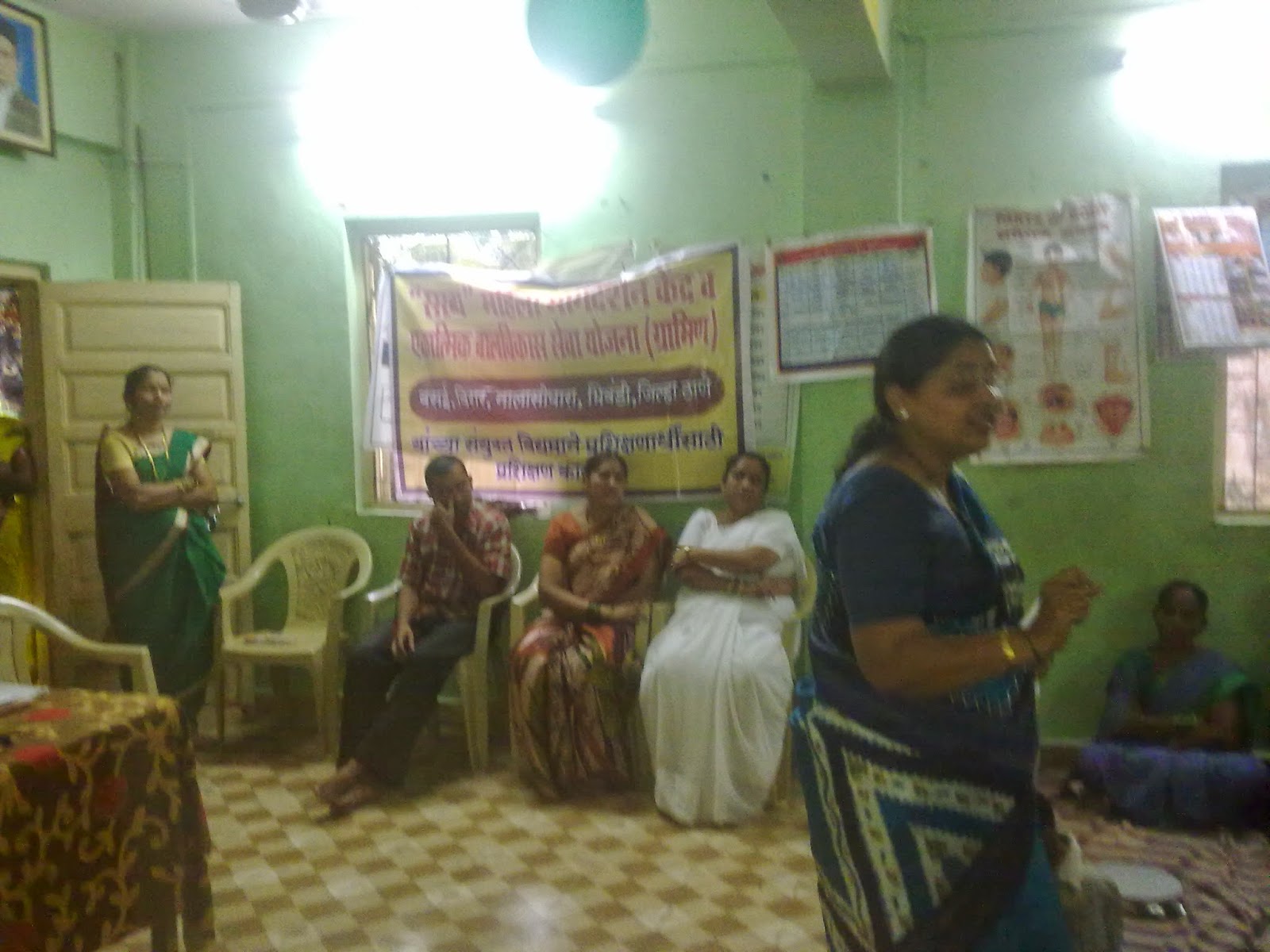 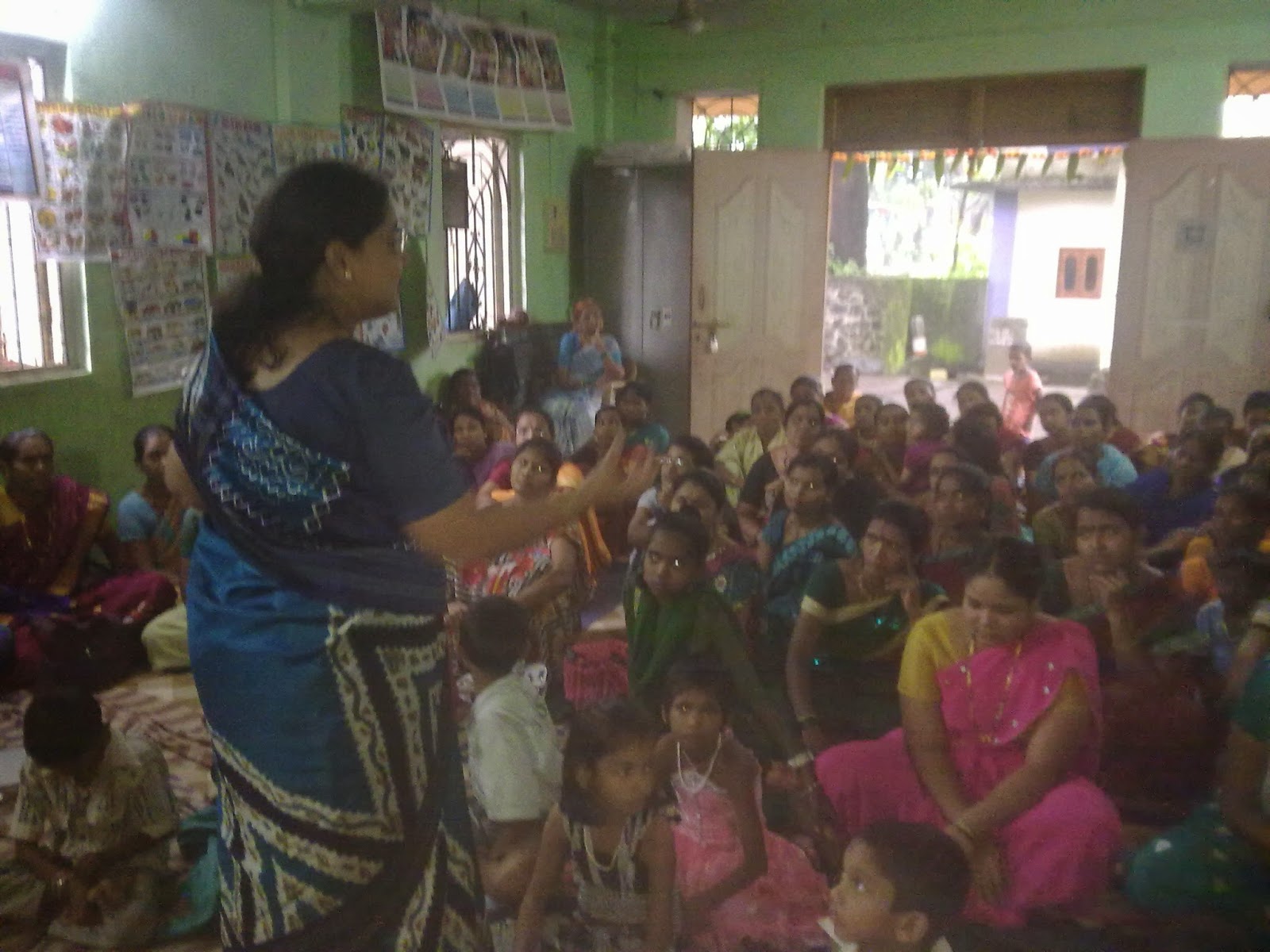 On 5th July 2014, Sakhya in collaboration with ICDS organized a workshop on “Women and Health” to make them aware of women’s health and its implications on the family and the overall society.  Sunila Bhise conducted the sessions.

The participants expressed that the session was very good and informative and that they had an opportunity to unlearn and also get to know information related to women’s health.
Posted by Unknown at 23:34 No comments:

Email ThisBlogThis!Share to TwitterShare to FacebookShare to Pinterest
Building capacities of Community Leaders on laws related to women

5 sessions were conducted in July 2014 in different areas of Thane to impart legal knowledge and laws pertaining to women and to build the capacities of the local community leaders to increase referrals and linkages of women in distress situations.  140 women gained knowledge on the laws and provisions.  Sunila Bhise and Chatush Singh conducted these sessions.


The contents included discussions on myths related to domestic violence, DV Act 2005,   filing of NC, FIR and writing applications to police stations.  The sessions provided a platform for the women to open up and express the violence faced and to seek assistance to address it.
Posted by Unknown at 23:28 No comments:

Email ThisBlogThis!Share to TwitterShare to FacebookShare to Pinterest
A day of fun and camaraderie 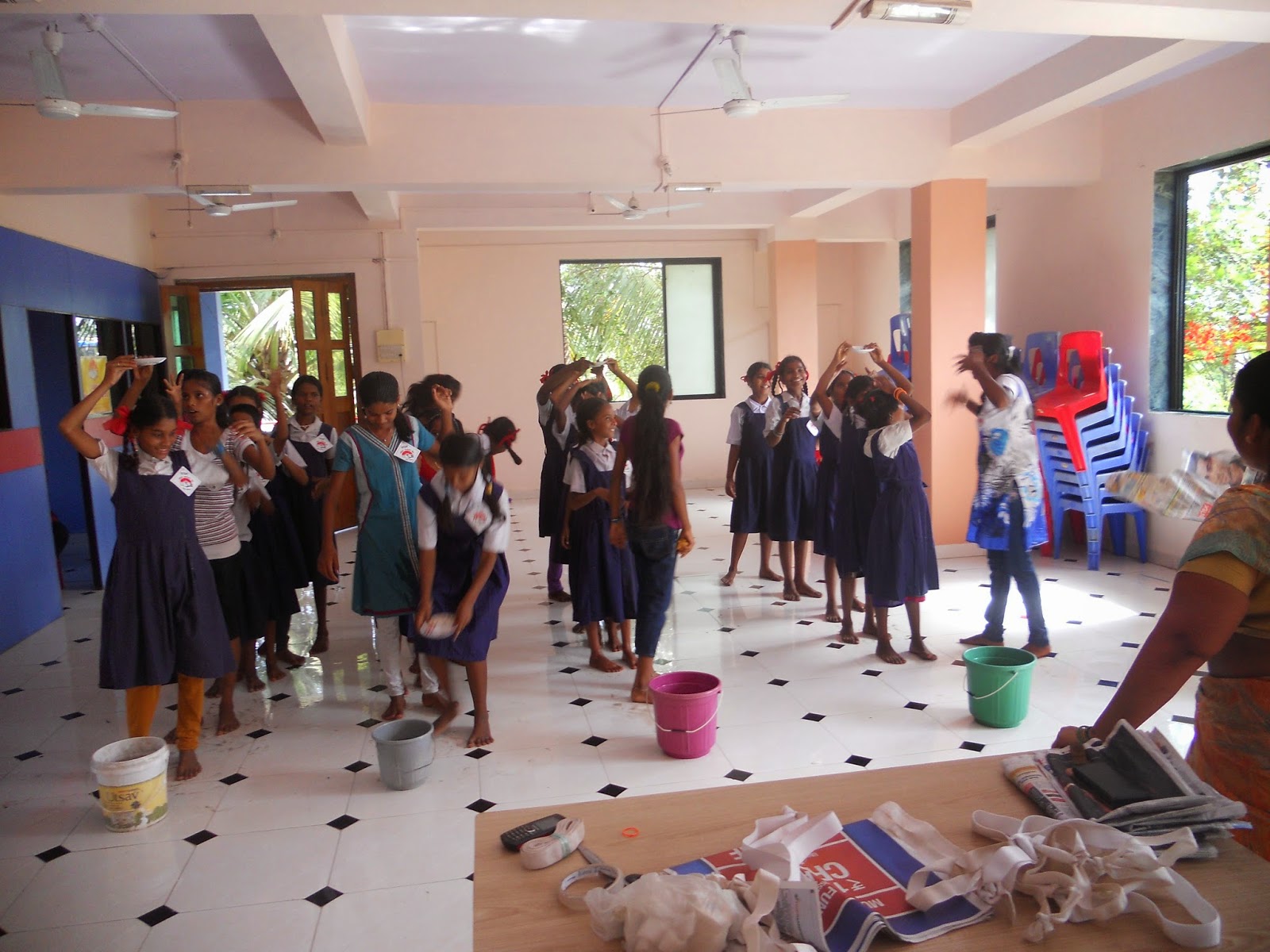 26th June 2014 was a day of fun and frolic for 25 young girls who participated in with full vigour and gusto.  They were motivated to perform in groups to understand the importance of group achievement, team building and team spirit in order to strengthen the group. Various games were organized by Shalini and Clipsy to harness and channelize their energy and to bring out a creative response.  They were very happy with the entire event and expressed that more such events could be held to increase their understanding of team work and performance.
Posted by Unknown at 23:13 No comments:

On 29th April, Payal’s aged 24 was referred by a social work trainee who is working in the hospital for mentally challenged persons in Vadodara.  According to the information given by the hospital authorities, Payal was there in the hospital for the last 1 year.  She was being treated for mental illness and when her conditions started improving she was able to give information about her whereabouts.  The hospital authorities had tried all their means to trace her whereabouts, had got in touch with various police stations but to no avail.  They then got the contacts of Sakhya through the website. The authorities informed Sakhya, upon which Ms. Hilda Fernandes inquired with the Nala Sopara police station whether a missing complaint has been filed.   The police said that there was no such complaint.  So Shalini and Geeta set about getting to know the whereabouts of Payal.  They were able to locate her residential vicinity and got to know that her parents were not there as they had gone for the younger daughter’s wedding, but they meet Payal’s paternal uncle who confirmed that Payal indeed stayed in Nala Sopara.  He also said that he did not know whether her parents had filed a missing complaint; his wife also informed that Payal was married but in a secretive manner.  A copy of the letter from the hospital and the contacts were given to the paternal uncle to further follow up with the hospital authorities and to inform Payal’s parents about the recent developments.

The hospital authorities were grateful to the efforts of Sakhya for locating the parents and relatives of Payal.

Rehabilitation of a destitute minor

Seema (the name changed) aged 11, studying in the 7th standard in the local zilla parishad school had been staying in Shivshankar Pada in Nala Sopara. Her father died to ill health when she was barely three years old and immediately after a year lost her mother to ill health.  She and her older brother were looked after by her grand mother.  She too passed away four years ago.  The villagers for some time provided food and clothing for the children. Her brother started grazing cattle while Seema began working in the homes as a domestic worker; both were earning a meager income.

Kamala Jadhav one of the active animators of the village informed Sakhya about the children’s plight.  The case was immediately taken up by Geeta Goswami, staff of Sakhya who then went about trying to find a shelter home for Seema and also to ensure that she is able to continue her education.  With the collaboration of the entire team comprising of Sakhya, the Child Welfare Committee, the local school and Ankur Children’s Home run by the St Anne’s Sisters, Seema was successfully admitted to Ankur shelter home in Mira Road on 21 June 2014.  The sisters in the home also wholeheartedly pleaded their support and commitment to the care and upbringing of Seema.
Posted by Unknown at 23:23 No comments:

Email ThisBlogThis!Share to TwitterShare to FacebookShare to Pinterest
Helping victim of sexual abuse by the father

During the regular screening visit, social worker came across Priya (the name changed) aged 12 years. She was sad and depressed and not in a state to speak. The social workers then daily visited her to inquire about her health and enable her to open up.   She lost her mother when she was 2 years’ old and was then looked after by her father.  When she hit puberty her father started sexually abusing her and also began to bring along his friends who in turn also abused her.  She was not able to decide whether it was appropriate to have relations with her father; only when she did not menstruate did she speak to her neighbor. The neighbor filed a complaint with the police station and her father was arrested while she was sent to the Child Welfare Committee (CWC). Subsequently she was admitted to Thane civil hospital for further medical investigations which confirmed that she was pregnant.  Upon further medical tests and DNA results it was confirmed that the putative father of the unborn child was her own biological father.
During her entire stay in the hospital the counselors regularly visited her to boost her morale and increase her self confidence.  She was given information about prenatal and post natal care, diet regime, the importance of good sleep and rest and to overall maintain a healthy and positive attitude in order to increase her coping capacity to face the tragedy that had befallen her.   She was also provided with information about the Manodhairya scheme wherein she can appeal for compensation as a victim of rape.
On 18th May Priya delivered a baby girl; she experienced post partum depression and refused to feed and nurse the baby regularly.  The counselors helped her and motivated her to nurse the child and to take care of the child and herself as she also began neglecting her health post the delivery. She became very indecisive and unsure about the future of the child and about her own future.  She also expressed that she did not want to keep the child.  Meanwhile the CWC had decided that the child would be relinquished and surrendered for adoption to an agency and she was informed about the decisions to which she had no objection.  She gradually began to respond to the counselors and was willing to talk and open up to them and share her mental dispositions and difficulties.

Updating knowledge of the staff

On 25th June Sakhya Women’s Guidance Cell organized a session on Sexual Harassment of Women at Workplace Act to update knowledge of the staff from socio -legal perspective.Ms. Anagha Sarpotdar a Researcher from Tata Institute of Social Sciences was the resource person.  She began the session with the background of the Act; gave a brief glimpse of Bhanwari Devi and the incidence of rape while she was on duty and the subsequent PIL filed by civil society and the role of the Vishakha Guidelines for bringing about the Act in its present form.  2 documentaries viz ‘She’ and ‘Breaking the Silence” brought about a grim picture, impact and the torture that women go through due to sexual harassment at workplace.  Very often these women chose to remain silent for various reasons.   This was also followed by a group discussion and understanding of the Act in the present circumstances and the status of women.  She emphasized on the impact that the incident has on women supported by many case studies.  She briefly explained the various provisions in the Act.


A barrage of questions posed by the staff while handling cases and networking with corporate entities were answered.
Posted by Unknown at 01:27 No comments: