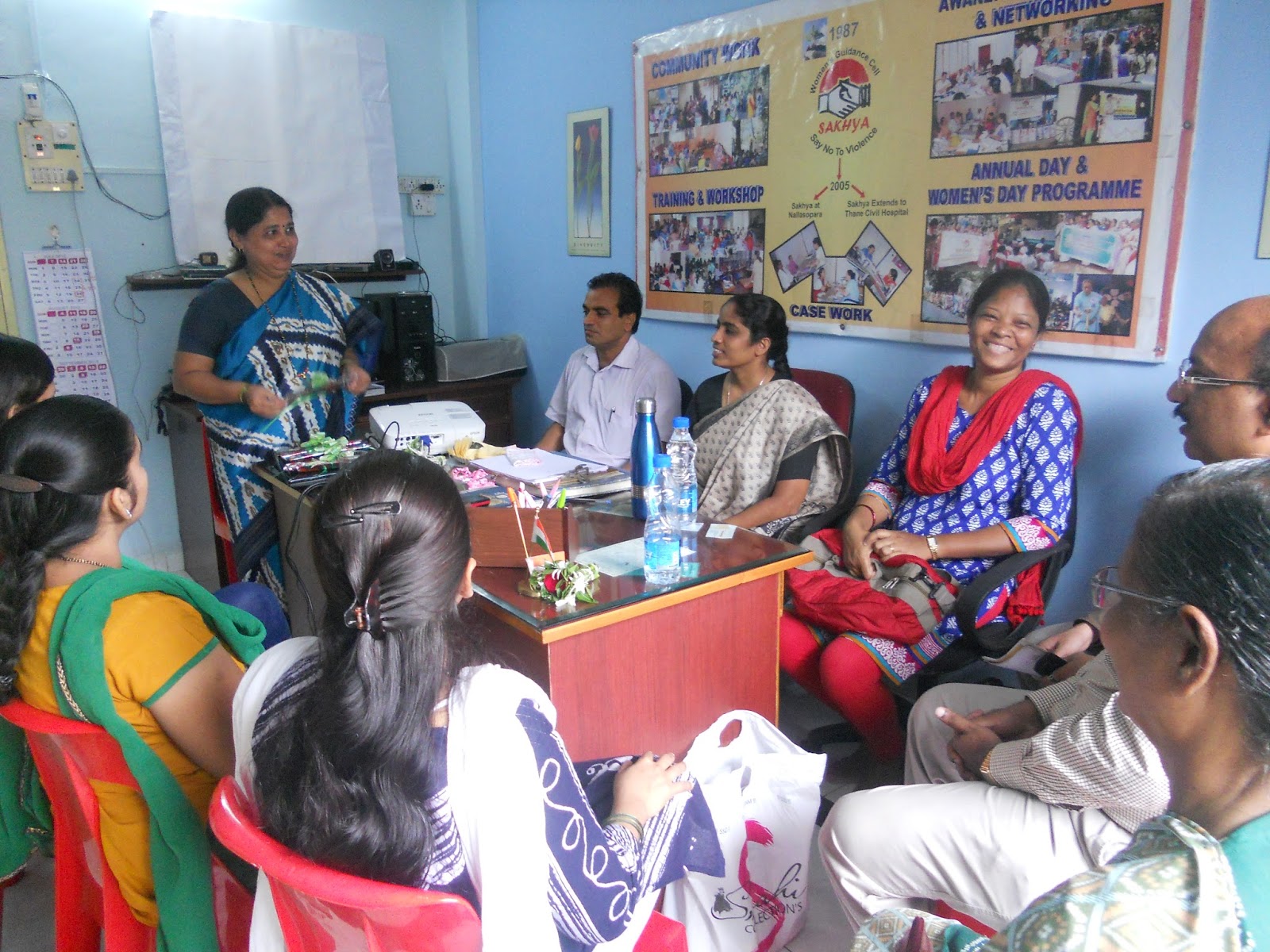 Meeting began with formal welcome of Caritas India team, Mr. Varkey PJ, Mrs. Asha Rosaline Ekka  and Mr. Aneesh Correa. Besides caritas India team Fr. Baptist Lopes from Vasai Janhit Trust and Ms. Philomina Vaz from Nirmala Institute were present. The staff of Sakhya gave a brief introduction of themselves. Ms. Rushila threw a light on last three years journey of Sakhya by power point presentation. Mr. Varkey from Caritas India took over the meeting with the appreciation address to Power Point Presentation made by Ms. Rushila.
Mrs. Asha was curious to know about what Sakhay do for rehabilitation of the domestic violence victims. Ms. Chatush Singh and Ms. Hilda Fernandes, director of Sakhya shared the cases handled by Sakhya highlighting the rehabilitation measures adopted. Mrs. Asha wanted to know about the types of cases Sakhya gets, sources of getting cases, causes of domestic violence. Ms. Hilda Fernandes and Ms. Chaush Singh answered all her queries. 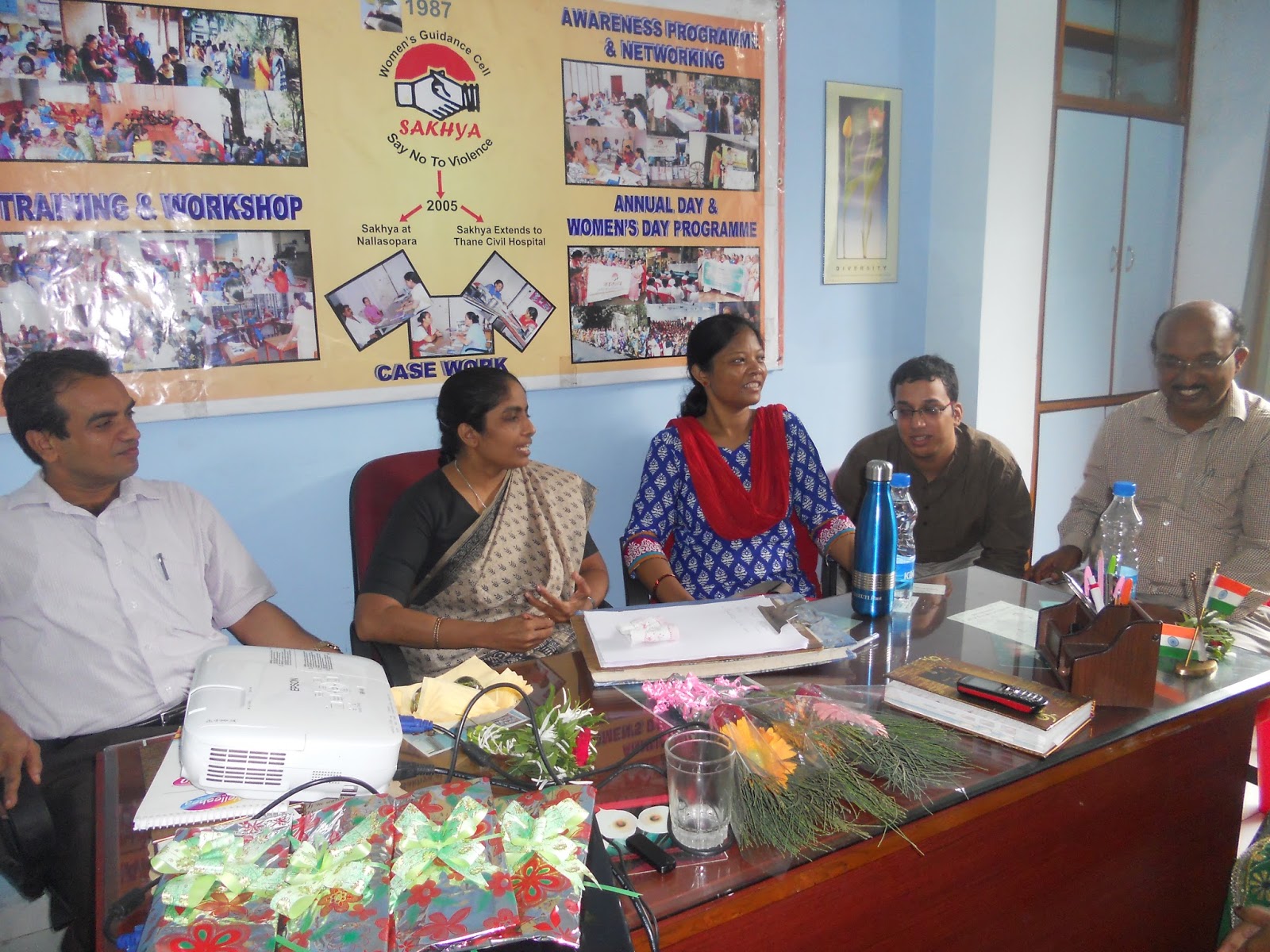 Mrs. Asha appreciated the work of Sakhya and she suggested that Sakhya should incorporate a male staff, the person who is against violence on women.
Fr. Baptis Lopes recommended to focus on Child Protection Policy as the scope of work is not limited to domestic violence only. He also recommended focusing on training of trainers (TOT)  with Core Committee members of Commission for Women at Vasai Diocese and if it gives good result then it should be multiplied.
He further recommended that Sakhya should emphasis on preventive measures rather than curative measures. 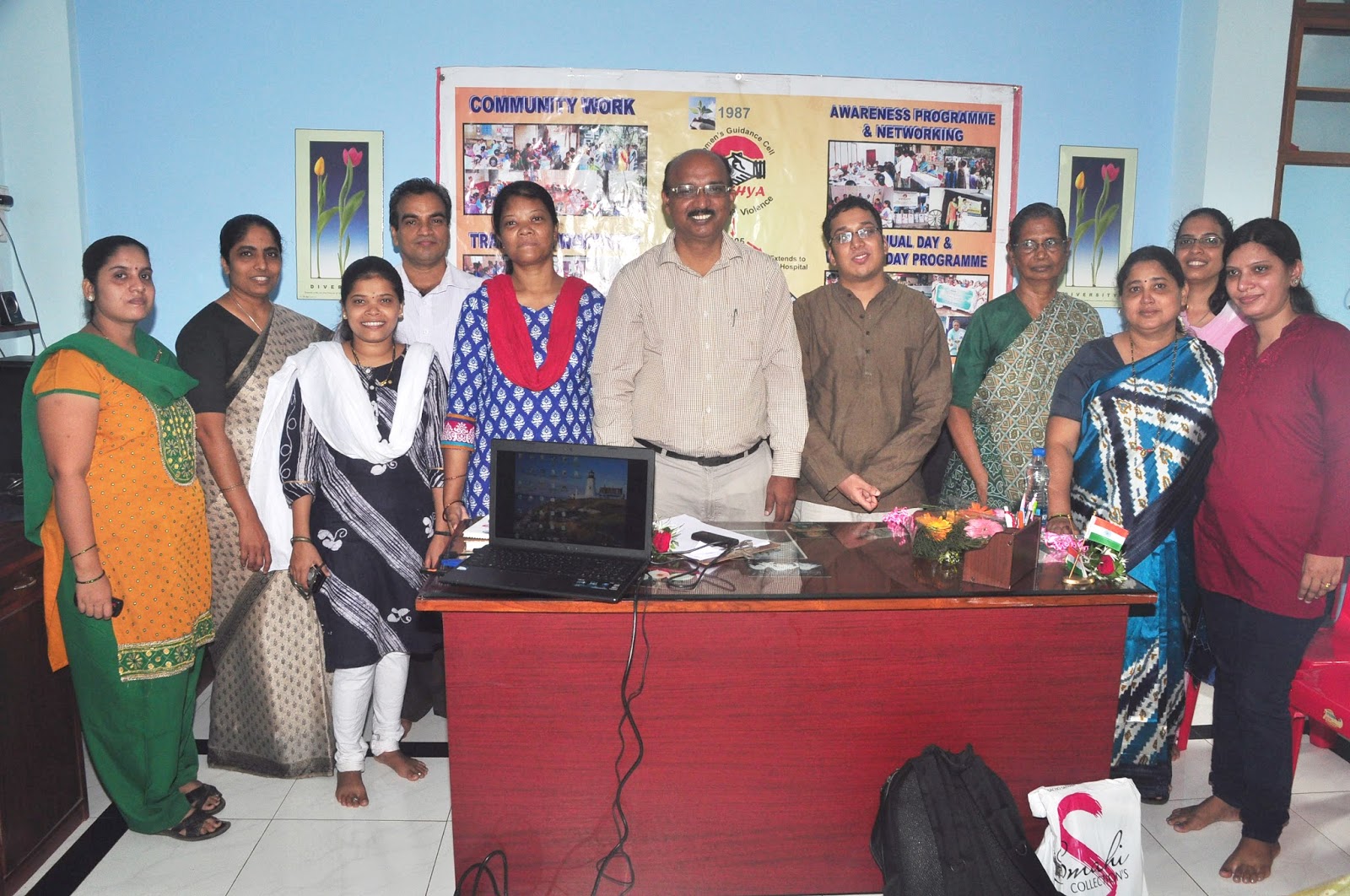 The Caritas India team reviewed all the files related to Sakhya’s work in last three years. the meeting ended with vote of thanks from  Sunila Bhise Sakhya’s staff

Rehabilitation of   HIV infected minor
Arti aged about 12 years comes from lower middle class family whose parents died of AIDS around two years ago. After death of the parents she was living with her old grandmother and two brothers. When she was at home with her grandmother she was allegedly very badly treated, beaten, and made to do all the work and given only dry chappatis to eat.

One of the relatives of  Arti put her in the  boarding at Nirmala institute in Vaijapur in June 2012 and she was admitted in class VI at Karuna Niketan School  there. She had no health problem then. After a year she went her home to spend summer vacation. She returned from her vacation, having a severe attack of herpes on her neck which took a long time to heal. She was taken to govt. hospital in Vaijapur for treatment where she was detected of having HIV+. When it was communicated to her grandmother she forbidden her to return to the village, her all close relatives rejected her. Since it was not possible for Nirmala Institue, Aurangabad to continue to keep her in boarding with others, they wished to put her in a place where she will be cared for and receive all treatment necessary.
Sr. Pracy D’ Souza from Nirmala institute  phoned Ms. Hilda Fernandes, Director of Sakhya to make arrangement to have transferred her to another institution. Ms. Hilda Fernandes got an information about shelter facility at Inigo Icaza Arruti, HIV Centre, Benepatti-Merces, Sandoor, Vasai(W) . On 23rd July 2013 she was produced before Aurangabad Child Welfare Committee to get  an order to transfer her at Inigo Icaza Arruti, HIV Centre Vasai. Aurangabad Child Welfare Committee recommended to produce the girl at Bhiwandi, Child Welfare Committe as Inigo Icaza Arruti, HIV centre does not fall within their jurisdiction.
On 23rd July Ms. Reena Singari brought her to Vasai , on the same day Ms. Hilda Fernandes and Ms. Reena Singari admitted her in Inigo Icaza Arruti, HIV Centre. On 25th June she was produced before Bhiwandi Child welfare committee and got order sanctioned for her stay at Inigo Icaza Arruti, HIV Centre. On 26th July Ms. Rushila Rebello,Socila Worker along with Shashi Kala,a Social Worker of Chirag, an Ngo working on HIV took her to Sion Hospital Mumbai  to register her name for ART and medical treatment. They got her name registered in HIV department, she was reconfirmed her HIV status and was prescribed to continue medicine and treatment.
On 29th July one of the sisters of Inigo Icaza Arruti  got her admitted in St. Elizabeth School, Holy in standard VII.  Arti is happily staying and getting all the necessary treatment, food  and shelter. We are happy that she can leave her life with hope and dignity

Exposure visit of students to
Police station and court 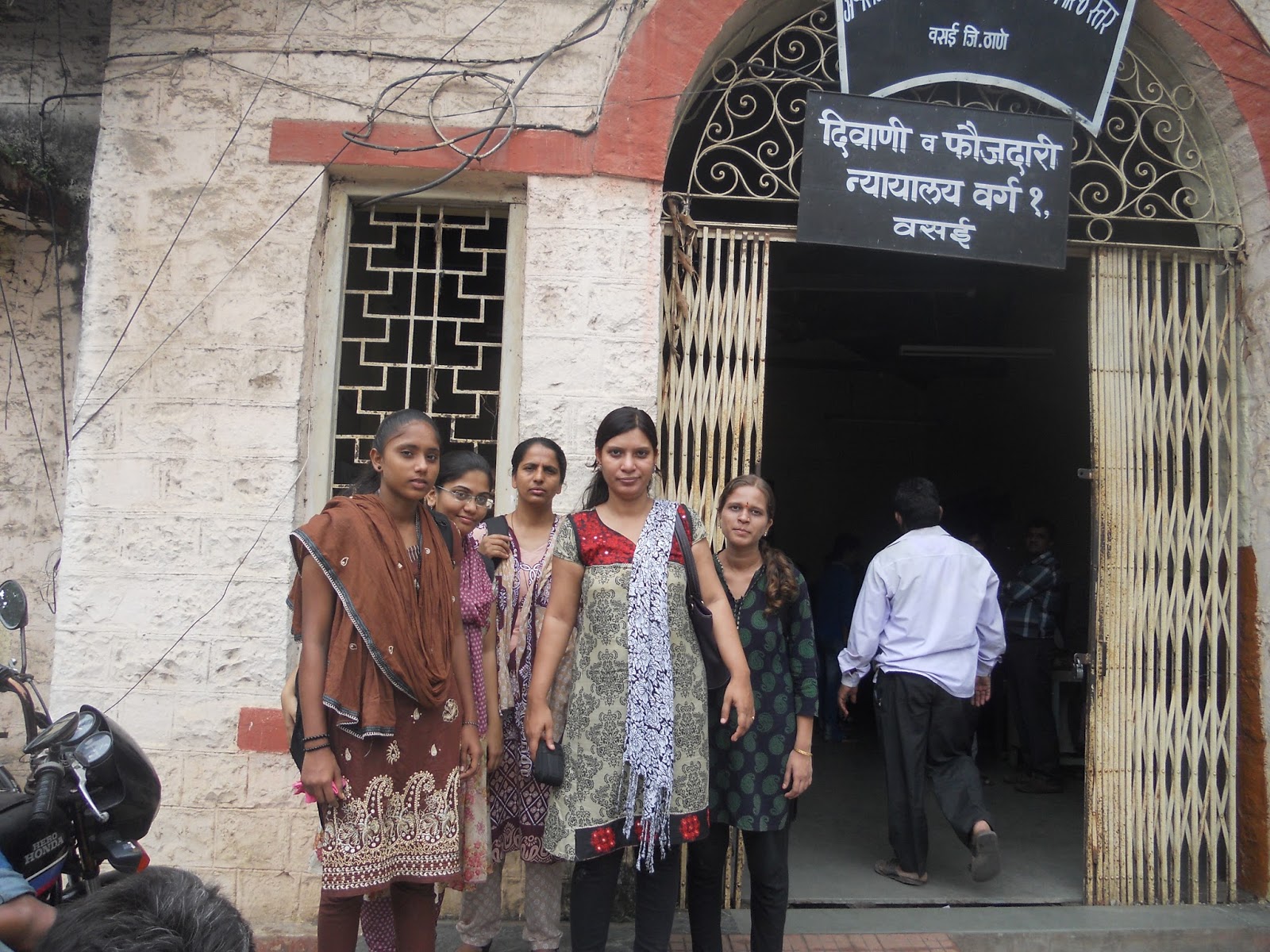 On 26th July 2013, Sakhya Women’s Guidance Cell organized an exposure visit to Police Station and Court for the students placed for field work in order to get them equipped with the knowledge of operation of Police Station and Court for dealing with cases of violence against women.
Court visit:
The court visit was conducted from 2:30pm to 3:30 pm on 26th July 2013. Five students of Nirmala Niketan, College of Social Work were accompanied by Ms. Chatush Singh, Social Worker  to Vasai, Judicial Court . They reached the court premises at 2:30 pm where Ms. Chatush Singh gave a short talk about legal system, structure of court and people who work in the court.They were briefed about the role of family court, the process of filing the case, hierarchy of court, the role of government lawyer etc.Afterwards they were taken to the court rooms to observe sitting arrangement of rooms which gave them insight about the place of trial. 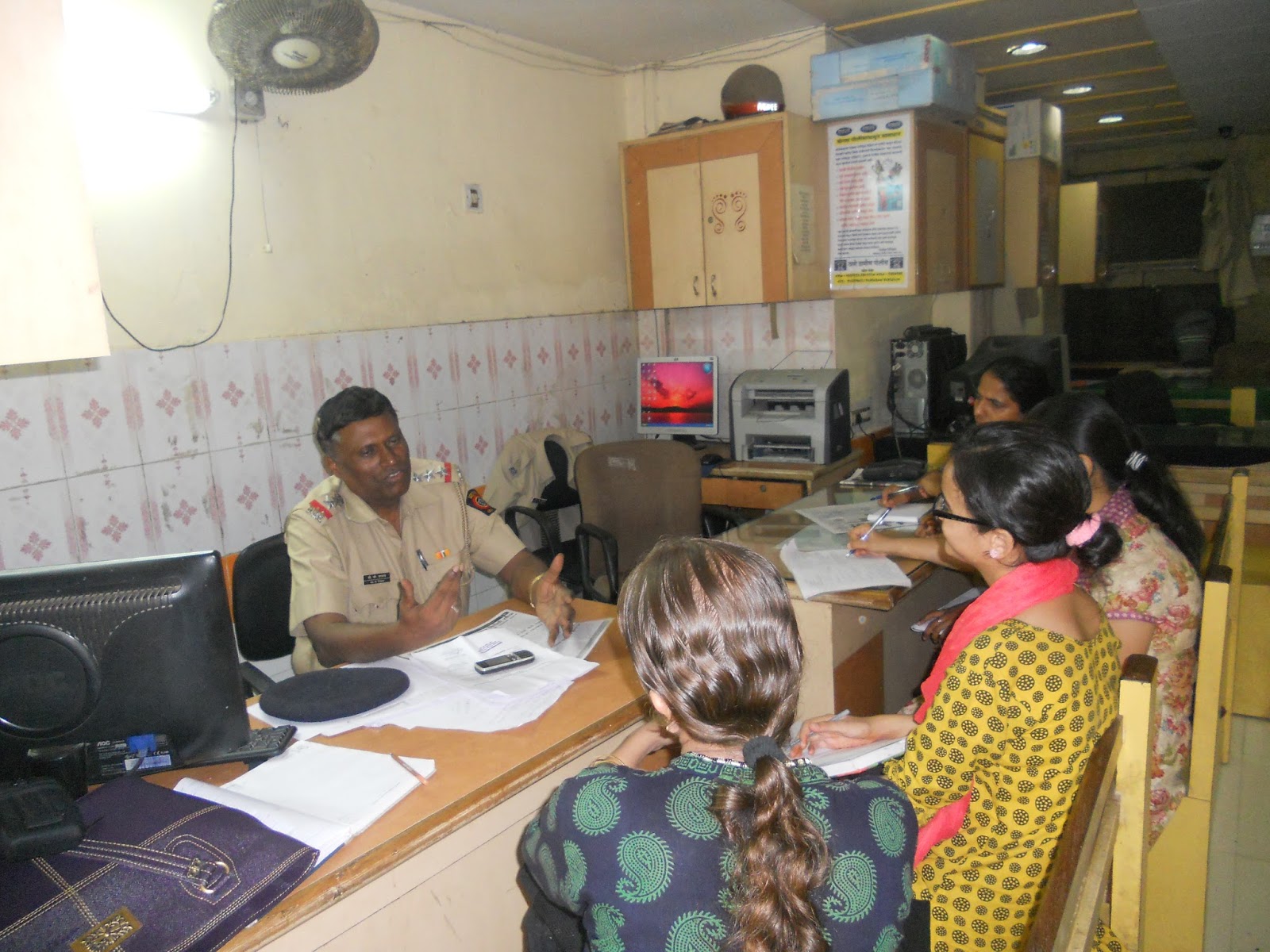 Police Station visit
The police station visit was conducted from 4:00 pm to 5:00 pm after court visit. The students accompanied by Ms. Chatush Singh, Social Worker reached to Manikpur, Police Station at 4:00 pm. An interaction was organized with Assistant Police Inspector (API) DV Jadhav who gave them orientation about  functioning of Police Station .  The students fielded questions related to violence against women on him to have them all answered.Mr. Jadhav provided them information about misuse of 498A IPC provision. He also explained them bail able, non bail able offence, cognizable and non cognizable offence, case diary, charge sheet.
The visit was a great learning for the students, it enabled them to understand the operation of court and Police Station. The students got an opportunity to have interaction with Police Official to clear their doubt and to get more information on the role of police station. They came to know the procedure how a woman victim of violence can get their case registered in Police Station.
Posted by Unknown at 23:46 No comments: