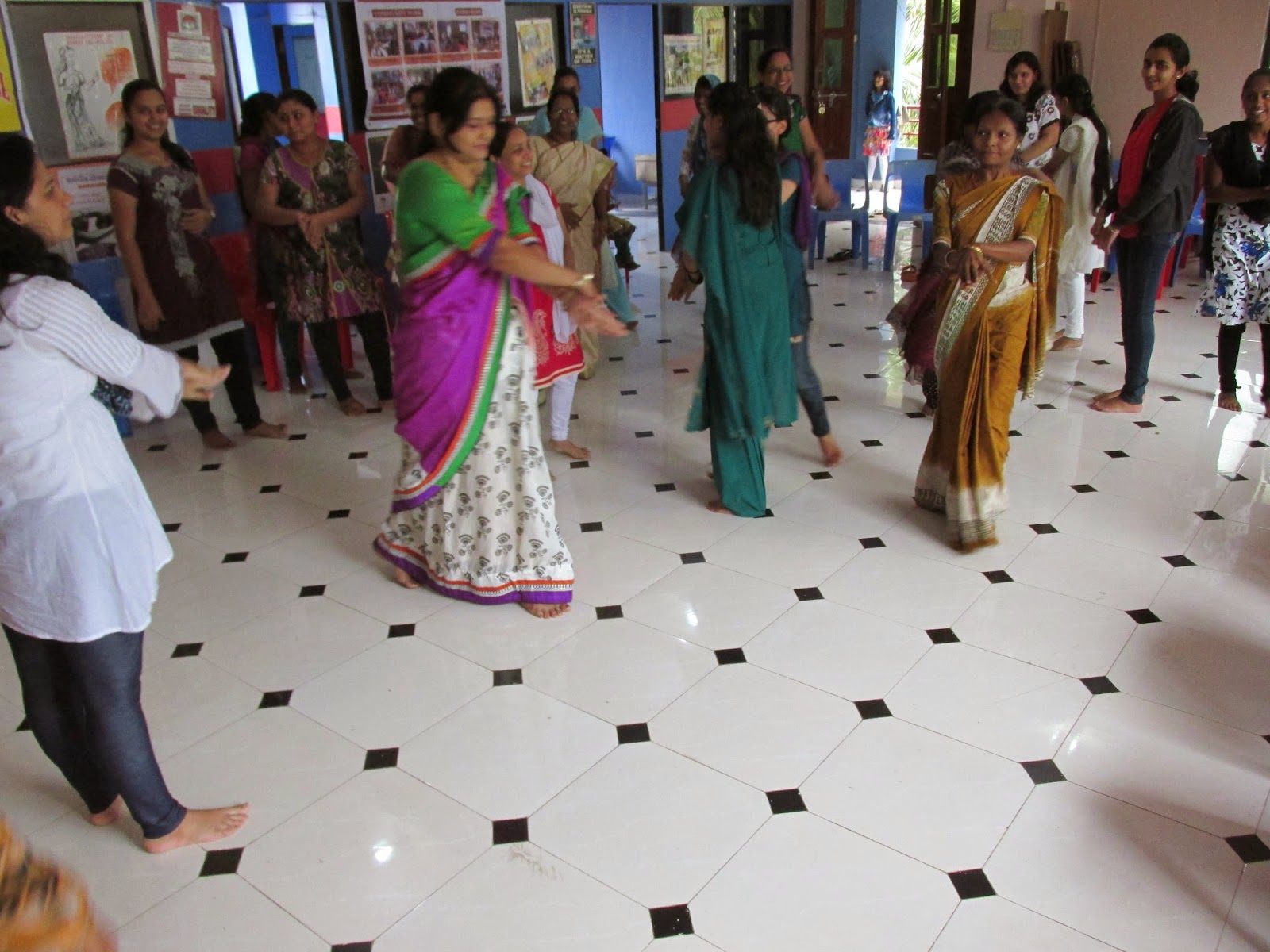 Sakhya organized a workshop on Positive Thinking on 15th February at Nirmal in which 24 women participated.Mrs. Evelette Sequeia and Mrs. Avidha were the resource persons who conducted the workshop.The workshop began with introductory session in which each of the participants introduced themselves accompanied by a different action. In order to lighten the mood of the day the participants were asked to close their eyes and to trudge along the hall with slow paces.  The women were divided into groups of 4 and each of them were asked to draw and paint pictures that depicted themselves and that which resembled their personality and nature followed by sharing in groups.  The sharing was very deep and reflective.
The next activity that followed was a meditation session led by the facilitator.  The session enabled the women to delve into deep crevices of their being and heal the pains and wounds inflicted over a period of time.  Later they were instructed to write on chits of paper all the aspects and limitations which hindered their development and subsequently flush it down a make believe toilet never to return. It was indeed an experience where women were able to give time for themselves in an exclusive manner.  They were happy and enriched with the experience. 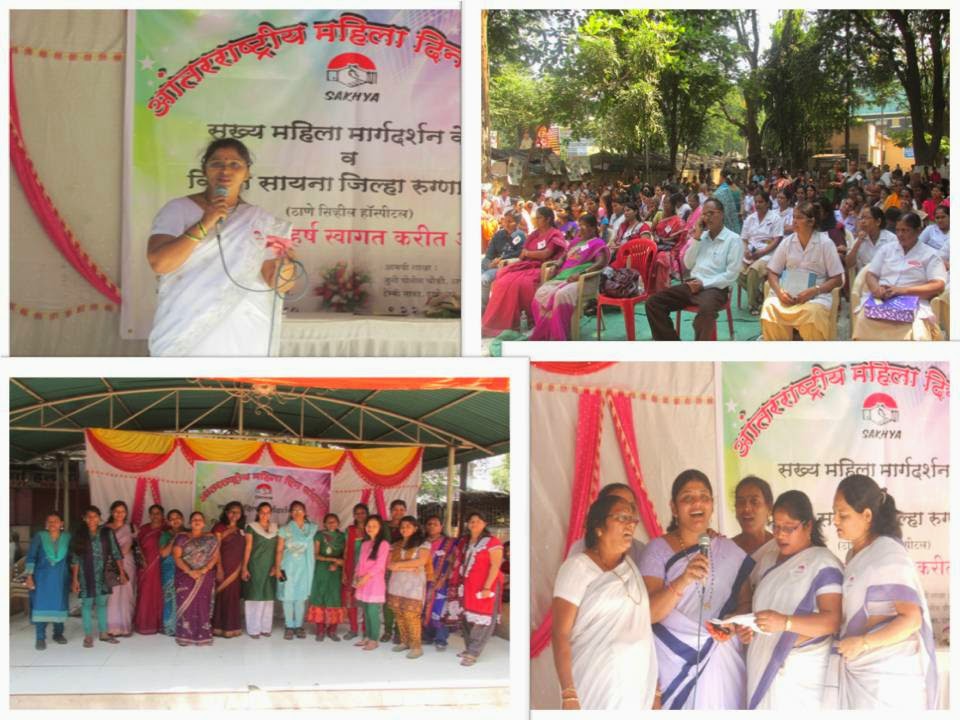 14th March 2014 was a day of joy, fun and camaraderie for the Sakhya Team and the Hospital staff of Thane as International women’s day was celebrated in Thane Civil Hospital. The event was organized by Sakhya – Women’s Guidance Cell.  The program began with a welcome song sung by Sakhya’s team followed by the lighting of the lamp by the chief guest Advocate Suvarna Pawse, Ms. Hilda Fernandes, Mr Rathod RMO of Thane civil hospital and women representatives from the community.  Ms Reshma presented a brief report of the achievements of Sakhya during the past year.   Two women from the community shared their testimonies and the intervention of Sakhya in their lives and how they have brought about a change in their lives.  The students from Samarth Vidyalaya School in Kalwa performed a very lively dance. Ms Kamini expressed deep gratitude and appreciation for the collaborative efforts of the Civil Surgeon and the RMO and the entire hospital staff for their support to Sakhya. Three people from the hospital were felicitated for their active collaboration and contribution to the activities of Sakhya in the Thane Hospital. Mrs Sanchita Parab community representative shared her personal experience of saying no to violence.  She also emphasized on the role of NGOs that strive and make efforts to give voice to voiceless women in society.  In her key note address Adv. Mrs Suvarna Pawse gave a gist of the various provisions in the law pertaining to women; the developments that have taken place in responding to emerging trends and needs to curb violence against women.  She also spoke about the flip side; cautioned the audience towards the misuse and abuse of these laws. The program came to a solemn close with the vote of thanks delivered by Kamini.
Posted by Unknown at 23:00 No comments:

Building confidence of the client

When Anjana received the notice from the court for divorce filed by her husband; she was worried and anxious; not confident that she would be able to face the proceedings and the trial.  Due to resource constraints she was unable to seek professional guidance from the advocate.  She approached Sakhya and expressed her unwillingness to consent to the divorce. After persistent follow up and counseling she was enabled to boldly face the trial proceedings and even present her side of the story in a bold manner.  Her case has been put for mediation by the judge who conducted the hearing and she has also been assured of free legal guidance if required.
Posted by Unknown at 02:26 No comments: 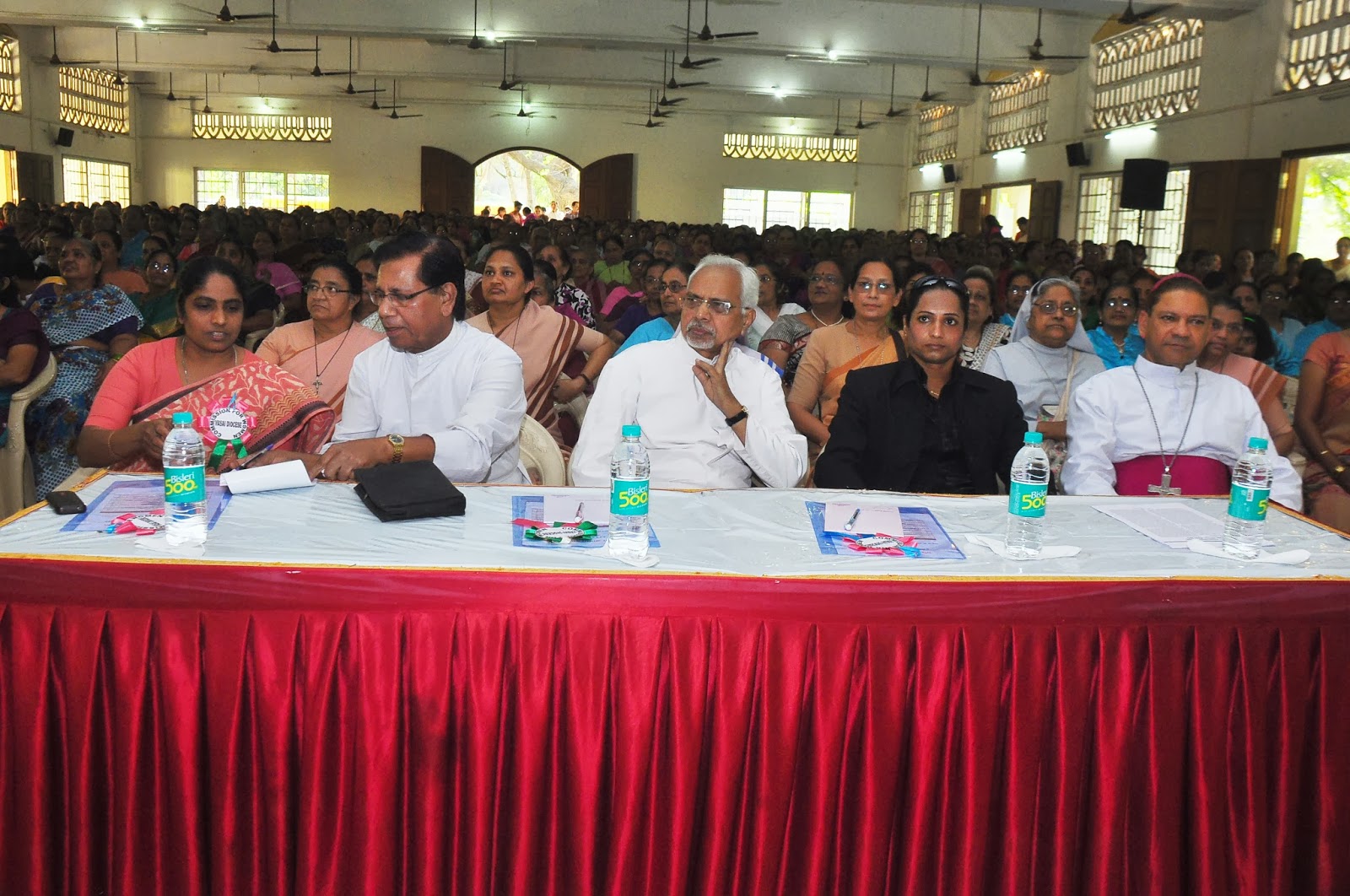 8 March was just another incomparable day in the year 2014 for the 1500 women from the different parishes of Vasai Diocese; who had gathered at the Bhandari Hall, Devtalao to express their solidarity with other women and celebrate their joy and feeling of fulfilment of being a WOMAN.

The women groups from 5 different parishes namely: Giriz, Gokhivere, Remedy, Nandakhal,  Shirley Wadi and Rajodi each put up a group dance with colourful costumes and took the audience on a cultural ride with their performance.  The group from Giriz performed a very soul inspiring Street play on women who decided to break the chains of bondage and willing to soar in the sky.

The event was graced by the luminous presence of his Eminence Archbishop Felix Machado.  In his key note address he reiterated and emphasized the innate skills and capacities of the women to organise and plan and meticulous about the details; he pledged his support to the endeavours of women in the Archdiocese.  Ms Hema Bhanga was the Chief Guest of the day.  She expressed being happy as a woman witness;  who dared to make a difference in a male dominated society by choosing a career in the Indian Police System and winning a Gold Medal for India in Sports.

Sr Hilda Fernandes delivered the vote of thanks; she expressed her gratitude for the support and collaboration from the Archdiocese, the commission and the parishes

While celebrating the success and dedicated service during the past 27 years, Sakhya organized “ARISE, AWAKE and ACT for CHANGE” a grand event to mark the 27th Annual Day on 22nd February with the sole objective of sensitizing  youth and people towards atrocities on women which increasing at an alarming rate.  The day witnessed the presence of more than 300 people at Samaj Seva Mandal to participate in the event. The program included a street play competition for youth groups of different Schools, Colleges and Institutions on gender discrimination and gender based violence.

The chief guest of the day Dr. Cecelia Carvalho, Principal of St Gonzalo Garcia College graced the event with her presence.  The event began with a welcome song sung by the Sakhya staff, this was followed by the lighting of the lamp by the guests and Sakhya team. The 7th quarterly newsletter; Hunkar cum souvenir was released by Dr Cecilia Carvalho.  Ms Hilda Fernandes, Director of Sakhya welcomed the participants.
In her key note address Dr. Cecelia Carvalho appreciated the hard work of Sakhya to make an impact and bring to fore the different issues affecting the women in the Indian society. She gave an insight and shared her own perspectives to bring to light the changes that have taken place over the years. The young girls from Shiv Shankarpada presented a graceful dance .
Nine groups from different schools, colleges and institutions put up street plays on the issues grappling women in our society.  The nine groups were:  Nirmala Mata School, St. Joseph Senior College of Commerce & Arts, Uttan, St. Joseph College Satpala, Carmel Convent High School, St. Thomas High School, St. Anthony Convent High School, Prabhat Colony Theatre Group, Nav Taare Youth Group. The street plays depicted violence on women in its various forms.  Those on the panel of Judges were: Ms. Clipsy Banji and Mr. Maxwell Rose who announced the winners of the day on the basis of their performance.

Nirmal Mata, Manikpur bagged the first prize; St. Joseph College, Satpala second prize, and Carmel Convent, Nandakhal third prize.  All the participants were awarded certificate of participation.  Ms Chatush Singh delivered the vote of thanks to all who contributed in making the event successful.  The program came to a close by singing the National Anthem.